When one of our friends told us that she wanted to celebrate her 50th birthday by riding Velocity at Zip World in North Wales – the fastest zip line in the world and the longest in Europe – I thought she was crazy. I mean, why would any sane person want to put themselves through that? What’s wrong with a fancy pants party where we all get to dress up and drink fizz? Or even a low key meal with close friends and family? At the time Tina first broached the idea I was mid cancer treatment and clearly quite vulnerable to daft ideas, Ad was keen to do it because riding a zip wire features on our family todo list for 2017 (and because he’s as mad as Tina), and the kids were (surprisingly) totally up for it.

I hate heights. I hate speed. I hate anything rollercoasterish. I’m not an adrenaline junky in any way, shape or form. In fact I’m the absolute opposite of an adrenaline junky – I’m the one that hold the bags and watches everyone else have “fun”. I totally blame the chemo fog for agreeing to it in the first place.

Fast forward a few months and it’s a cold, wet, very early (as in 7am! Who gets up that early on a Sunday morning if you don’t have tiny people waking you up at an ungodly hour???) November morning and we find ourselves heading off for a 3 hour drive in heavy rain up to Penrhyn Slate Quarry in Bethesda. The kids (including Abbie’s boyfriend who must think we are nuts) are unimpressed at being woken at 6am, the dog’s going mental because she thinks she can come with us and I’m remembering how much I hate heights. Ideal.

From the minute we arrived my heart was pounding and I felt sick. I was totally planning to just wimp out at the last minute. Tina and Ad were annoyingly excited by the whole thing. Just. Don’t. Get. It. I mean just look at these stats! Eeek!

Once kitted our in very attractive boiler suits (not the posh dress and heals I was hoping to be wearing to Tina’s 50th party!) and hard hat (Why? Can’t see that making much difference if you fall from a zip line over 200m above ground!) we trekked up to The Little One – the warm up zip ride. 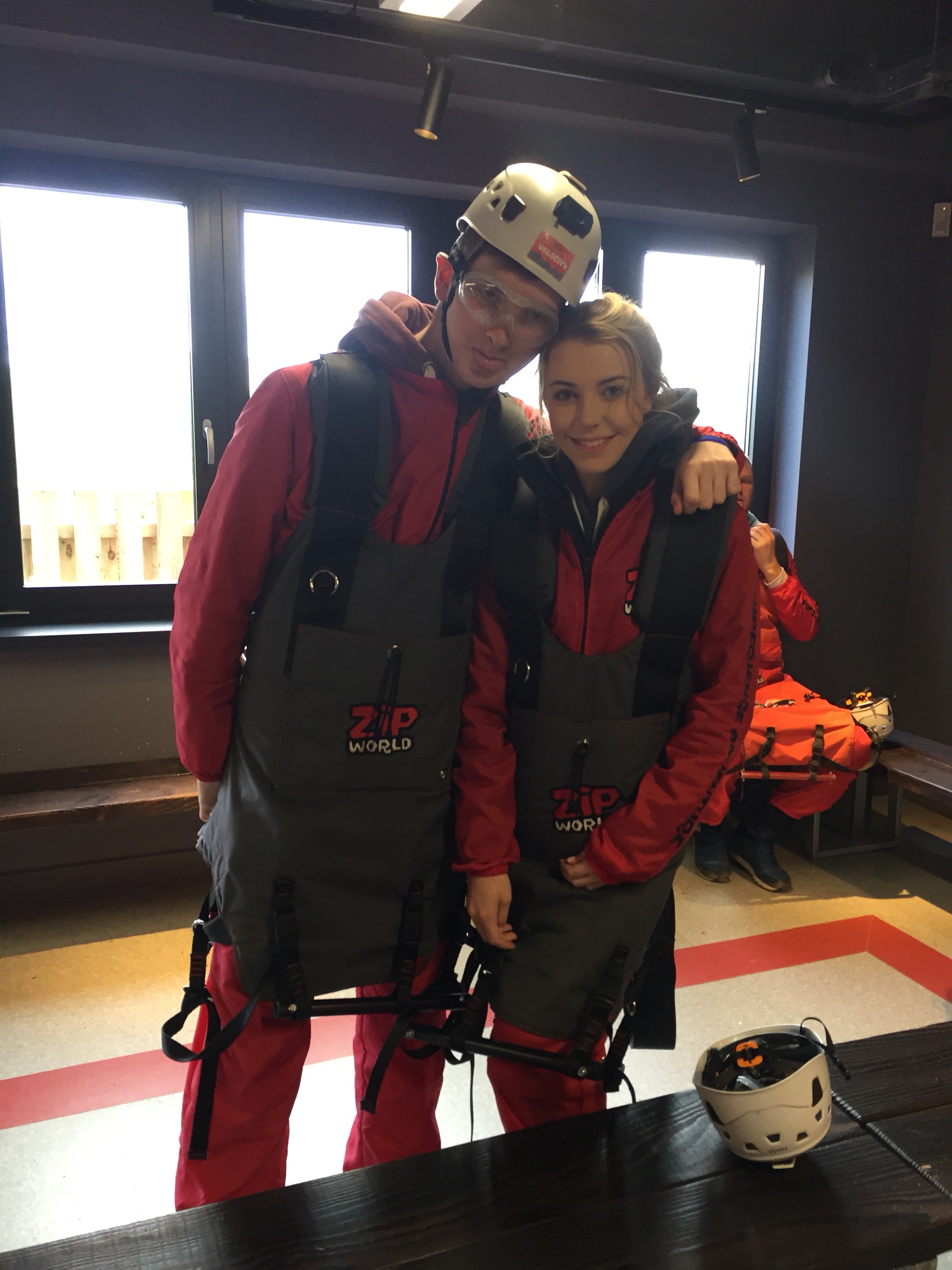 It actually didn’t look all that little to me. One by one we were hooked up to the zip, lying face down, looking out over the quarry. Somehow I missed my bailing out opportunity and before I knew it it was my turn and it’s me hanging there. That dangling moment, waiting to be pushed off was terrifying. My heart was pounding, my head was aching (I thought it was from stress but when I took my hat off at the end of the day it was clear from the apparently hilarious imprint left on my forehead that it had been fastened way too tight) and I was swearing under my breath (well mostly under my breath) at Tina. 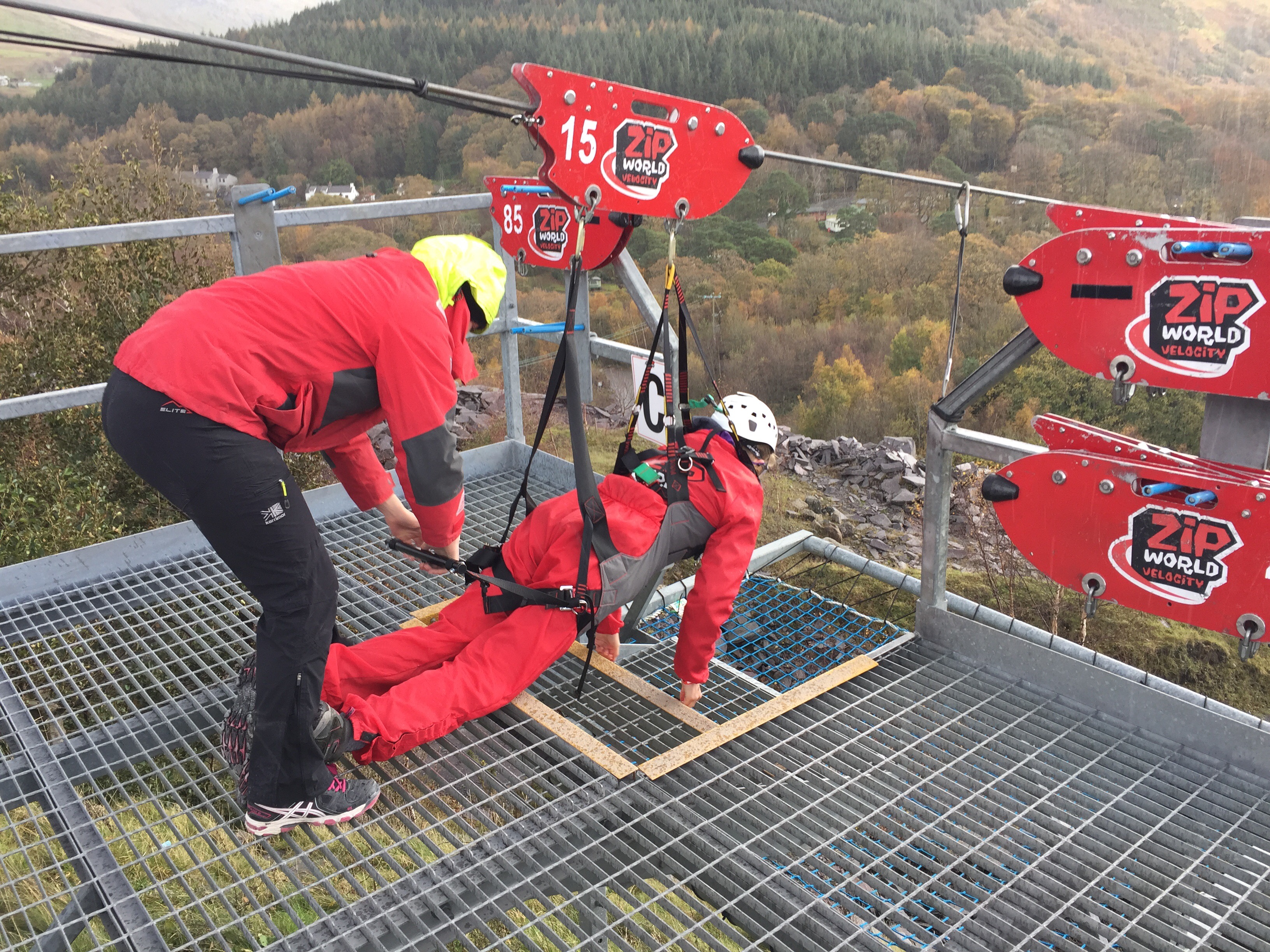 The dangling stage for me lasted an age. Communication between our tower and the landing station failed (ideal) and we couldn’t be pushed into oblivion until it was re-established. It felt like forever.

Then in a blink of an eye it was happening. I heard Josh scream on the zip next to me and I swear my heart skipped a beat. But WOW. How very exhilarating!!! In a few seconds The Little One was over and although scary I felt like I might just be able to conquer The Big One.

We were driven up the side of the the mountain in a red, bone shaking truck. The views were spectacular.

My nerves returned and any bravado left me as we approached the zip. It became clear that, relative to The Big One, the zip we had just survived was The Teeny Tiny One. The view from the top was stunning. So very beautiful. And although I could have sat and looked across it all day, I wasn’t feeling the need to zip across it head first at 100 miles an hour. And I’m not even exaggerating there!

The landing station was so far away, way past the lake, we could barely pick it out in the distance.

Before I knew it I’d missed my bailing out window again and I was dangling over this incredible view trying not to think about it going wrong. The instructor had told us that it was possible to slow down too quickly (“so keep those legs straight!”) and come to a stop too soon. “Don’t panic” she said. “We’ll have a rescue team out to you in about 10 mins”. Don’t panic???? Hanging 200m above the ground??? FOR 10 MINUTES!!! How the hell do you not panic???? So with all this rattling through my mind, I’m pushed off and yet again hear Josh scream as he’s pushed off at the same time. It’s sooooo high, sooooo fast but OMG so beautiful and I’m literally flying over the lake. It’s not scary really – once the dangling is done with anyway. 60 seconds and it’s sadly (I know! Never thought I’d say that!) all over. My legs had turned to jelly and every part of me was shaking – but I was totally buzzing too.

And that was it. All over and done with. What an incredible experience and I’m so glad I didn’t bottle it. With all the excitement behind us and blood pressure returned to normal there was only one thing left to do – hit the bar with this fabulous lot. 🥂🍾💕