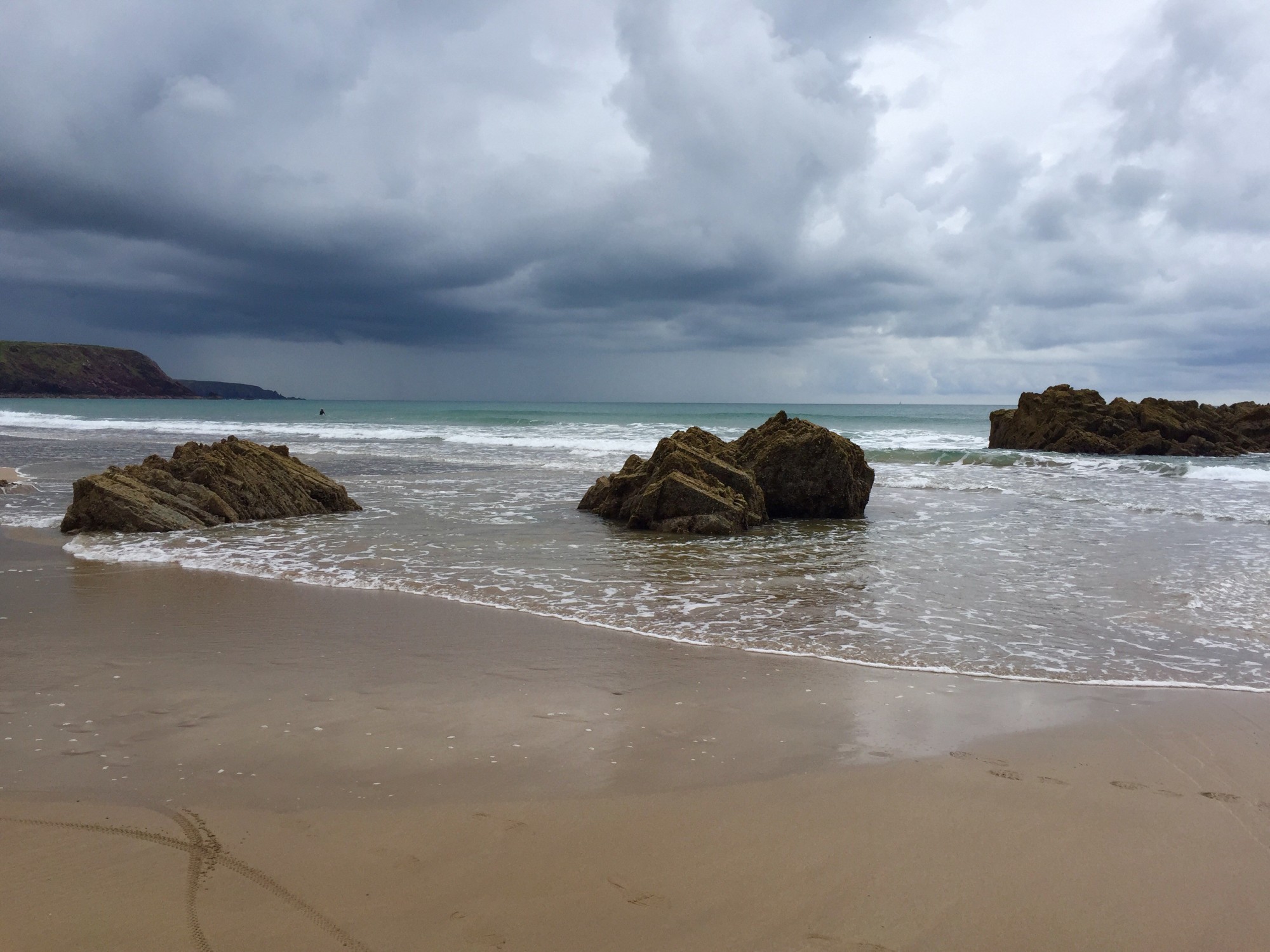 You’ve probably already read about our day (in the rain) in St David’s. Fortunately the weather picked up for day 2. Not enough to need the factor 30 that I optimistically packed along with the swimwear. But it did stop raining and the sun occasionally peeked from behind the clouds.

Bosherton Lakes, a National Trust nature reserve, had been recommended to us by friends and we weren’t disappointed. A footpath winds its way along the banks of the beautiful freshwater lily ponds to a spectacular beach at Broad Haven South. 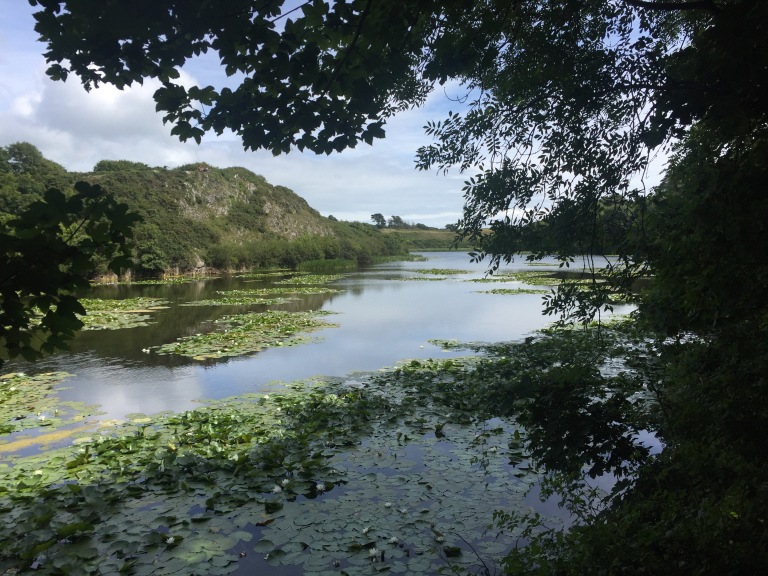 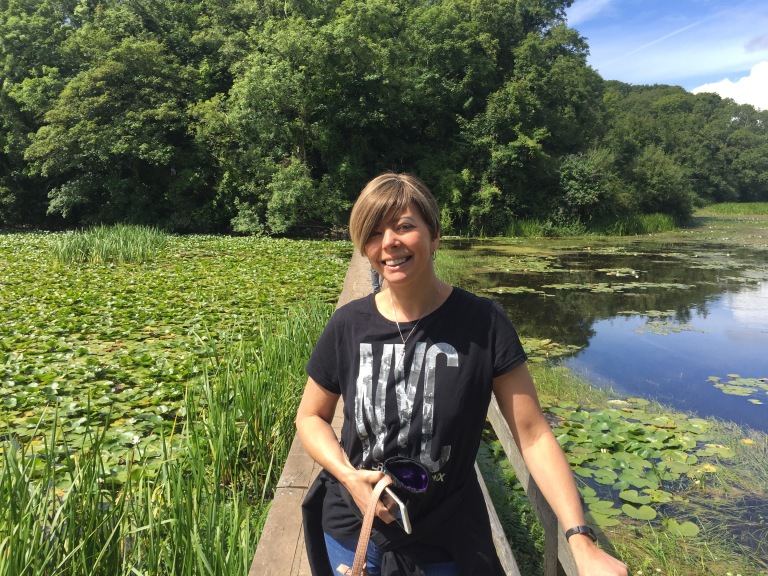 The walk down to the beach was about 3/4 of a mile and easy going. The beach is so worth the small amount of effort needed to get there. Relatively empty golden sands stretch out down to the sea, the waves good enough for body boarding. The sun was even warm enough to take off my winter hoodie. For a few minutes anyway. 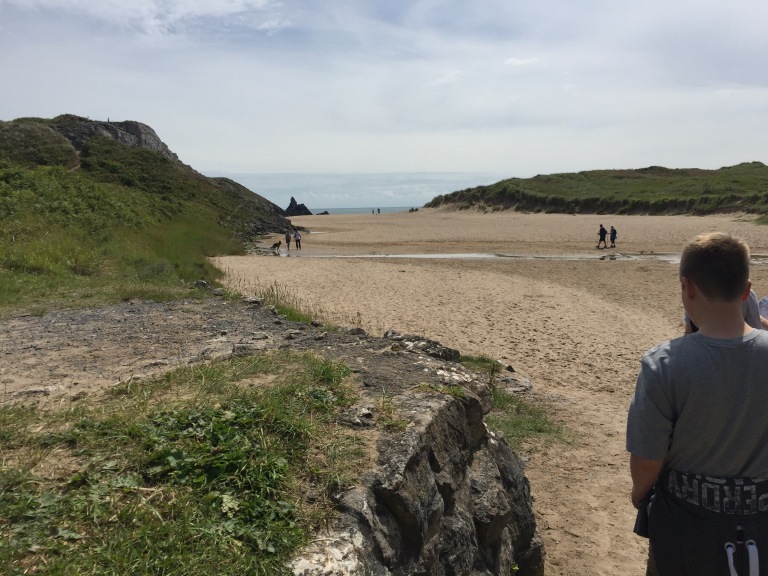 Unfortunately we didn’t take all our beach gear down to the beach, not really expecting the weather to perk up and not wanting to carry it. Josh was desperate to get in the sea (mad child) so our next stop was Freshwater East, a wide bay backed by sand dunes and a car park very close by. The mad child changed into his swimming shorts (but not his wet suit!) and ventured into the sea. Not for long though!!!

Day 3 we woke to the rain. Not just a shower though. No. It was torrential, bouncing off the ground, mini rivers flowing past the front door. Not a day to rush out that’s for sure. With weather warnings in place we decided to stay in PJs for the morning and set dad the task of cooking breakfast! 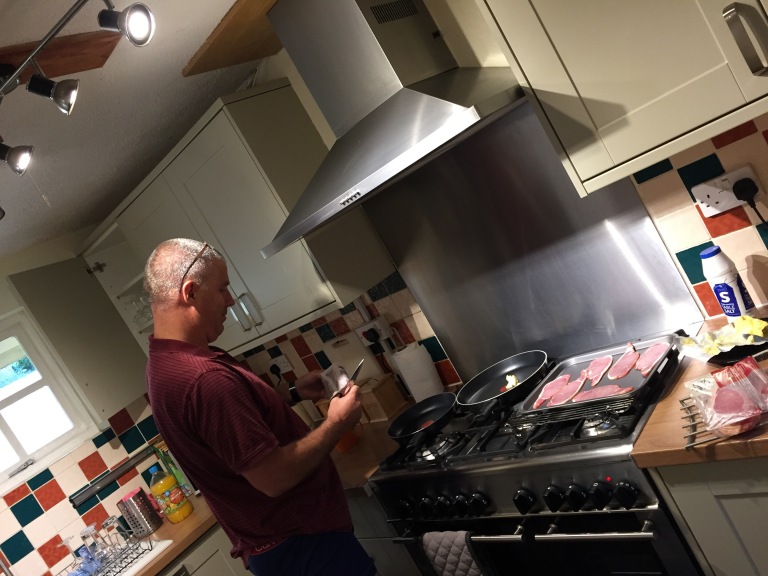 The deluge of rain eased back by mid afternoon and allowed us to venture to the beach. There are plenty of stunning beaches to choose from in Pembrokeshire but, not wanting to waste too much (rain free) time in the car, we pitched up at the local beach – Marloes Sands, another remote National Trust owned beach. Marloes is a magnificent bay with golden sands, rock pools and interesting cliff formations. 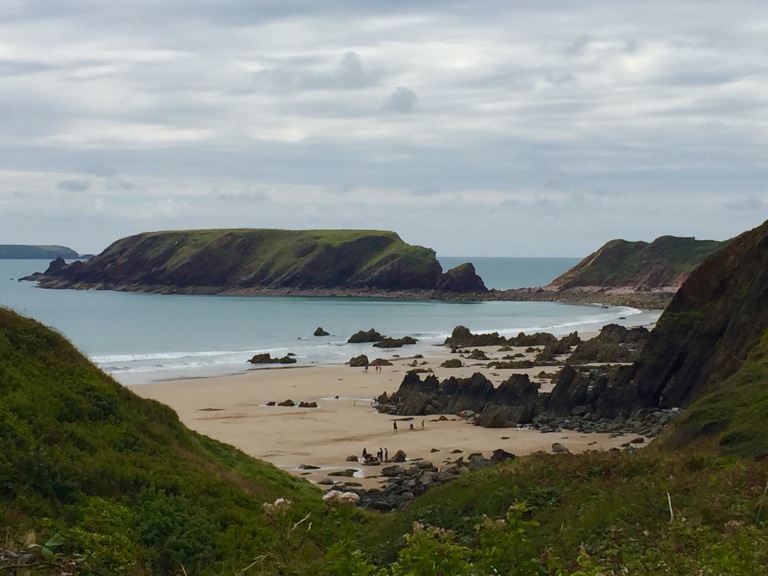 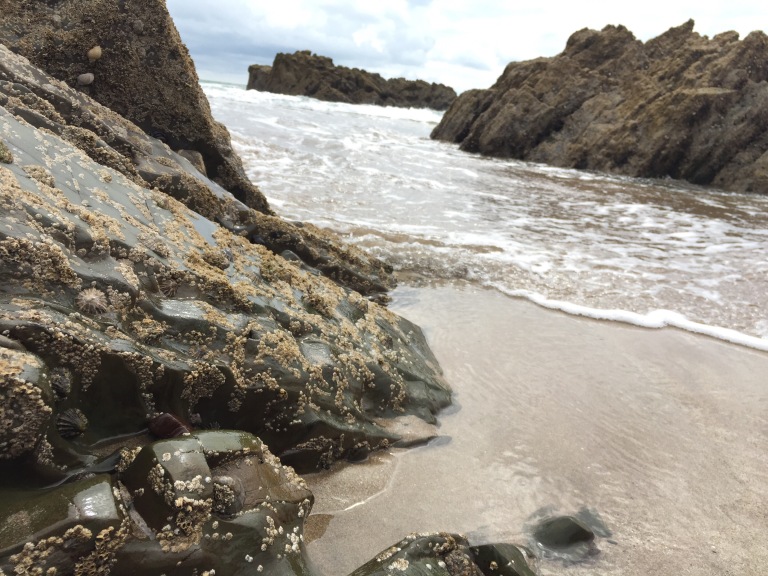 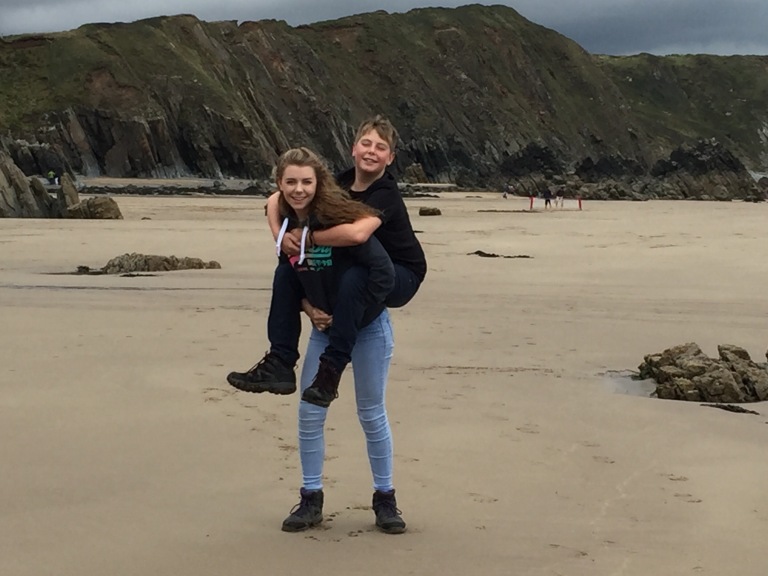 In fact we were so smitten with Marloes Sands that when the sun made an appearance the following day we headed straight back armed with swimwear, beach towels, wetsuits and food. Before hitting the beach for the day we dragged the kids on yet another stunning coastal walk. 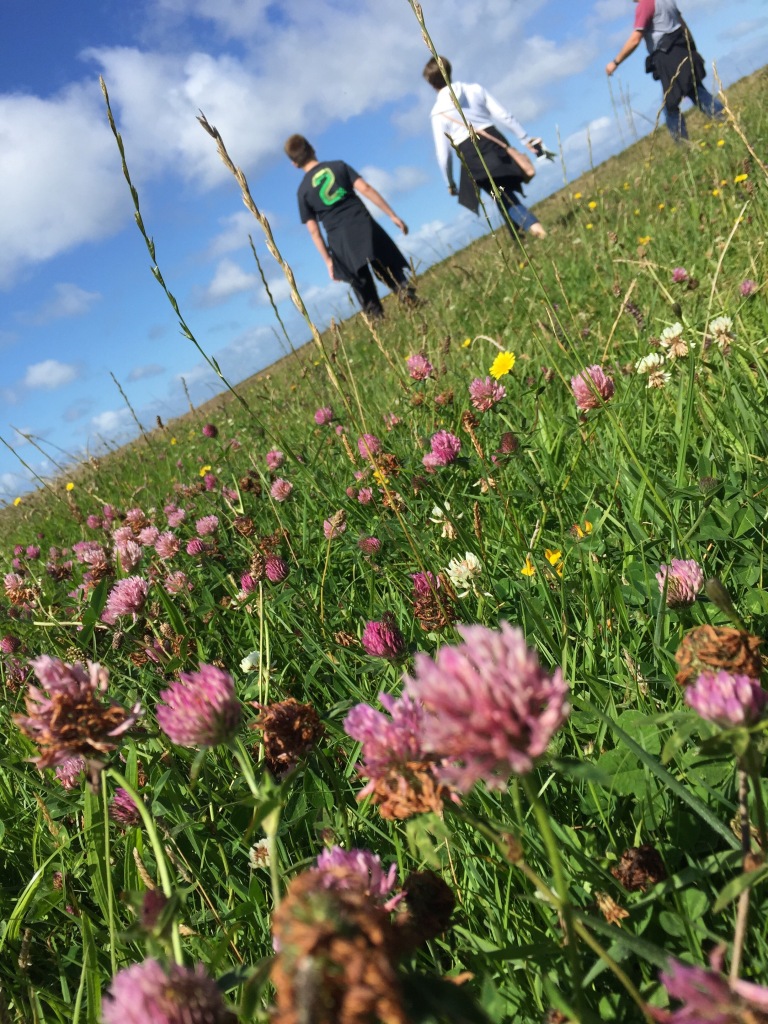 The sun may have been out but it was far from warm in the breeze. And by breeze I mean gale. Oh, and the clouds came over too. So actually it was cold and windy by the time we got down to the beach, but we had a plan and were determined not to deviate from it. We walked the length of the beach trying to find a  sheltered spot to camp but had to admit defeat and plonked ourselves down and tried not to get sandblasted. The kids changed (Abbie was actually manhandled) into their wetsuits and spent all of about 3 minutes “enjoying” the sea before giving up.

An hour later we trudged the half mile uphill slog back to the car, laden down with sodden towels and swimsuits, coats, hoodies and picnic blanket. As much as I love Wales, the Canaries it isn’t!

Because we are gluttons for punishment, when the sun came out the following day we decided to have another beach day. Many have recommended the NT beach at Barafundel Bay on the Stackpole Estate so we decided to check it out. Well we would have done if there had been anywhere to park. Instead, we spent a few hours on the beach at Freshwater East. The sun stayed out all day, the boys ventured into the sea and in a moment of “Who gives a sh*t?” I took my wig off!!!! This was a big step for me. In fact it was the first time I’d been without a wig in public. It felt good to feel the sun on my head and the breeze in my hair. Ok so there’s not too much hair there yet but I’m definitely not bald anymore and it is growing fairly quickly now. Still grey though. And I’m not brave enough to post a pic!

We did get to Barafundle Bay that day – we stopped on the way back to the cottage when most visitors had given up and gone home. All those recommendations were right – it was well worth a visit and the half mile trek from the car park across the cliffs. 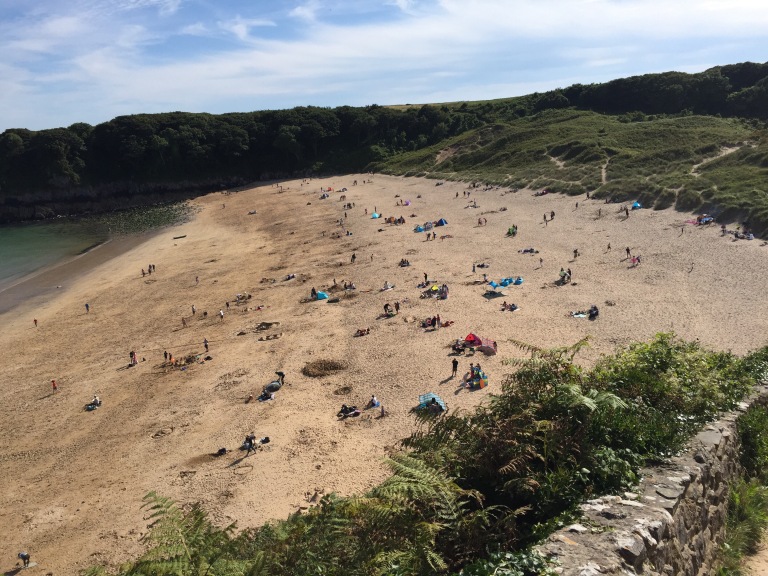 Our final day was a bit of a damp squib. Both Ad and Josh had slept badly, Josh also had stomach ache and it was raining. Ideal. We had a super slow start to the day, got to Dale beach after lunch where we explored the rock pools and walked the coast path. 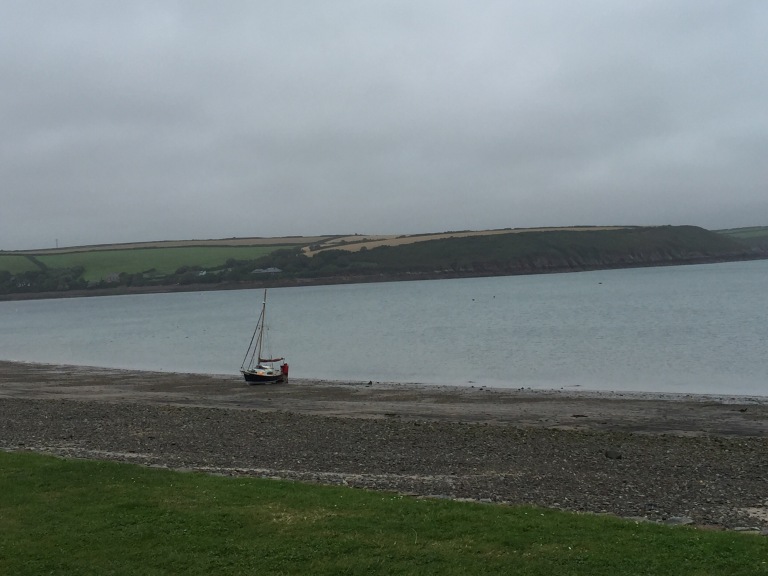 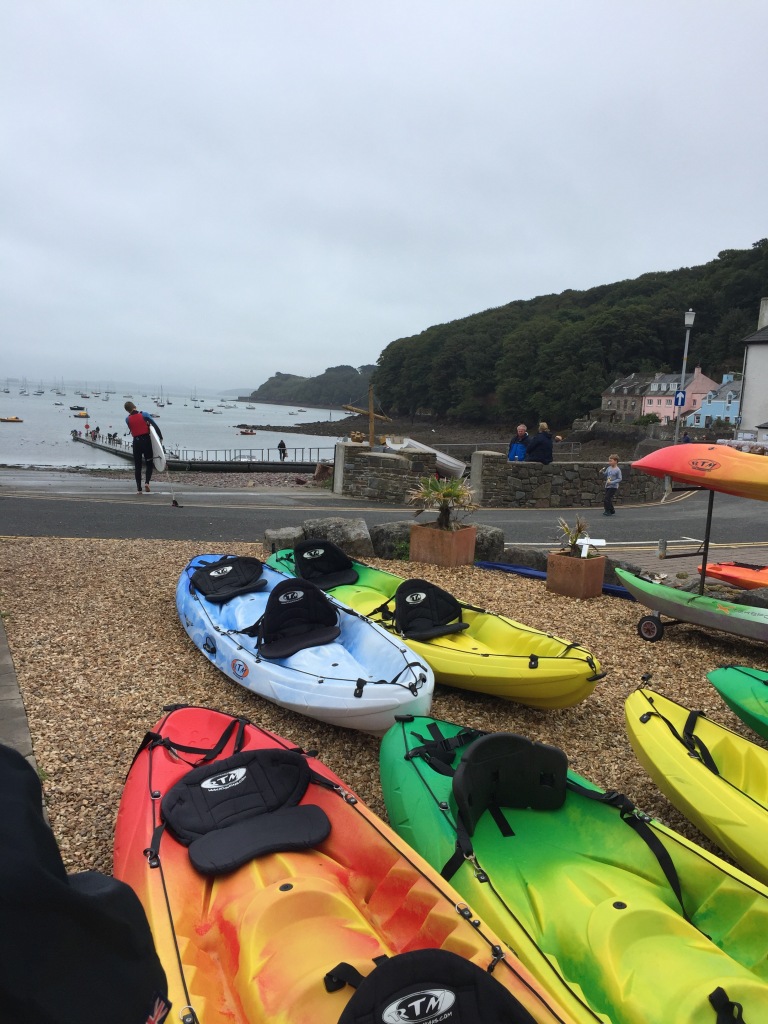 We have had a much needed break from real life this week. There may not have been a swim up bar and there was not much in the way of sunshine – but there were no hospital visits, doctors or scans. I call that a result!

5 thoughts on “A week in Pembrokeshire”